During one of their coaching sessions, Jason asked his manager Ellen if she could think of one area he could work on over the next 30 days that would result in a dramatic and rapid improvement of his closing numbers. He was surprised at how quickly she answered.

Jason was confused. His expression said, “what on earth do you mean?”

“Right now,” Ellen explained, “you only speak one language. It’s called 'D.' When you run into someone who is as fluent in D as you are, you usually have a great conversation. But there are lots of people out there who don't speak D, Jason. If you and I worked together over the next month, you could become fluent in 'I,' 'S,' and 'C' as well. You'd speak three times as many languages fluently - - behavioral languages, I mean - - and the universe of people you could have great conversations with would be three times larger. And your numbers would improve.”

Have you ever noticed that some people jump to quick conclusions, don’t like to get bogged down with details, and like to take the 30,000-foot view of issues?

Or that others want, first and foremost, to make and keep friends?

Or that still others just don’t like change and conflict, and want to avoid making decisions?

Have you ever noticed that there are some people who want all the details before they act—and may even suffer from “paralysis of analysis”?

If you’ve ever noticed people who fit those descriptions, then you’re in a good position to expand your repertoire of selling languages. Each of these groups represents a separate behavioral style, a separate language. Each is valid, important to notice, and important to understand … especially for professional salespeople.

The popular DISC behavioral model is an important tool that can help you develop a deeper understanding of individual prospects and buyers. DISC outlines four clear sets of behavioral characteristics that describe, with remarkable accuracy, just how human beings process information and emotion … and how they prefer to interact with others.

Of course, DISC is an acronym. “D” stands for Dominant. “I” stands for Influencer. “S” stands for Steady Relator. “C” stands for Compliant. Each collection of characteristics is referred to as a behavioral style. No one is exclusively one of the four DISC styles, but most people do have a dominant or preferred main style plus one or two supporting styles, depending on the person they’re dealing with and the particular situation.

No style is better than another. There is no “good,” “bad,” “right,” or “wrong” style when it comes to DISC.

If you learn to speak all four DISC languages, not just your own preferred language, you can give yourself a major competitive advantage in the marketplace.

AN OVERVIEW OF THE FOUR LANGUAGES

It’s important that you understand your own primary DISC style. Once you do, you can adapt your behavior to each of the styles, and you will exponentially increase the effectiveness of your communication with prospects—and everyone else. The following overview will help.

Dominants: Dominants are extroverted, often opinionated people who love to take action. They prefer to be in charge of situations. When they aren’t in control, they are uncomfortable. They are bored if they aren’t challenged. Dominants do not like small talk. They like to win and get ahead. They are not natural team players, but they are focused, direct, and to the point. They don’t want to hear the why—just the what. Get to the point and cut the social stuff with Dominants.
If you are a Dominant, remember to give people time to talk things through. Let people self-discover; don’t just jump in and give them the answer.

Influencers: Influencers are personable and trusting. They love to talk, interact, and leave the action to others. Since they want to be liked, they are eager team players. Influencers are creative and humorous, but they also may be disorganized. They can be impulsive and intuitive, relying on feelings, but they are not logical decision makers. Whenever you can, let them express themselves.

If you are an Influencer, you will want to make sure you don’t end up dominating conversations. Elicit the viewpoints of others who may not have your social skills. Try to stay with the agenda and get clear on the next steps arising from the interaction.

Steady Relators: Steady Relators are amiable, patient people who know how to keep the peace and avoid conflict. Since they practice and prefer constancy and consistency, they don’t like changes or surprises. These people are loyal, with a preference for long-term commitments. They don’t often reveal their true feelings to outsiders. Don't ask them to abandon situations with which they are familiar. Respect their need for group discussions and gradual change. Remember, too, that Steady Relators are deliberate by nature and can appear slow to make decisions; invest the time necessary to build a truly meaningful relationship with them.

If you are a Steady Relator, the areas to watch out for include: making sure you request clear agendas up front prior to meetings and problem-solving sessions, so you and others can be fully prepared; brainstorming with a clear path forward; and making sure you share what you’re really thinking, and why, with your prospective buyers. That may be difficult when it’s not your first instinct to share such things with new acquaintances, but it is still important to find a way to let people know where you stand and what you recommend.

Compliants: Compliants are cautious thinkers. Detail-oriented perfectionists, their high standards follow the book. Since they are busy getting one more fact in search of the perfect answer, they may be slow, or even unwilling, to commit to a course of action. Compliants are analytical and orderly in their thinking and acting, relying totally on facts and figures. Don't pressure them to make decisions without the information they need.

If you’re a Compliant, you will want to make a conscious effort to socialize more and get to know prospective buyers on a personal level. You will also want to look for opportunities where you may be able to add value by capturing relevant best practices and formalizing important processes.
By taking just a little time to better understand your own DISC style and adapt to the DISC styles of your prospects, you can improve your communication skills … and your closing numbers. That's what Jason did. Contact me today to learn more. 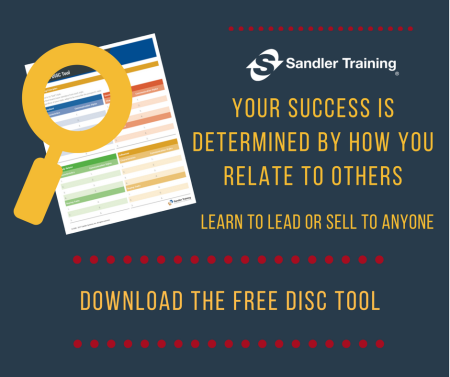 Your ability to effectively relate, communicate, influence and motivate others is a crucial skill in creating successful relationships with customers, prospects, colleagues, subordinates, managers, friends and family members.

A DISC profile provides a comprehensive overview of the way that people think, act, and interact.

Sell or manage more effectively by seeing people through their lens. Fill out the form to receive your complimentary DISC Communication Tool.

Be Friendly with Your Customers, But Never Friends

Too Much Product Knowledge Can Cost You

Is a Good Offense Always the Best Defense?